There were a lot of oohs and ahhs, and laughs during show and tell at the February meeting.  (Some members bring good stories with their projects!) 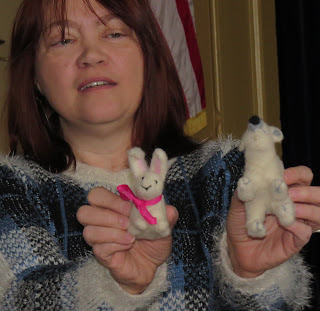 Mary Kozub started us off with her sweet needle felted critters.  She is willing to share the technique at retreat if anyone is interested. 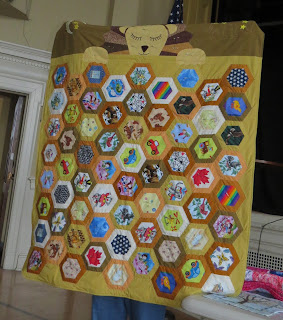 Nancy Ellers is nearly done with her granson's I-spy quilt, just in time for his first birthday. 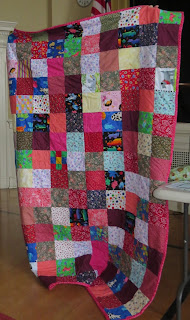 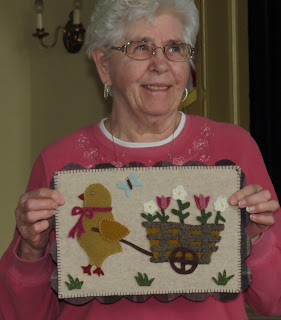 Junamae Quternous bought this from the BC Woolery last year when they visited our guild. 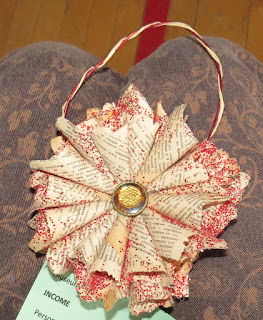 Junamae is looking for help in recreating this ornament she was given. 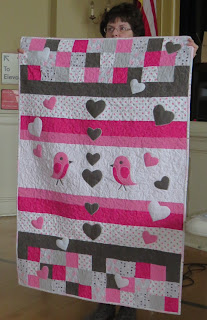 Mary Ellen Casey made this for a soon- to -arrive granddaughter. 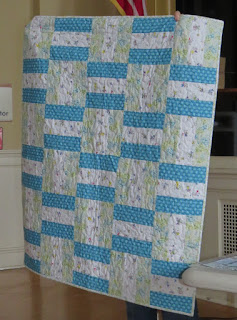 Mary Lowe finished up a couple of her UFOs to donate to community service. 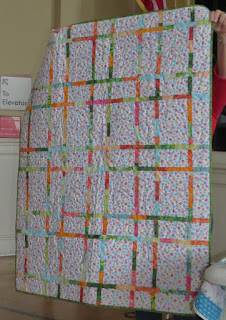 Mary bought the kit for this one at retreat last year. 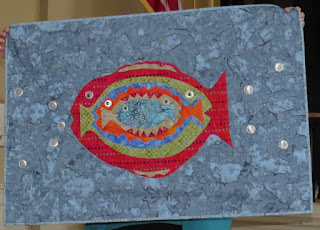 Elaine satisfied two challenges with this piece, titled "Food chain" - a fish for the ArtCGirlz, and finding inspiration in artist Paul Klee for her fiber artists group. 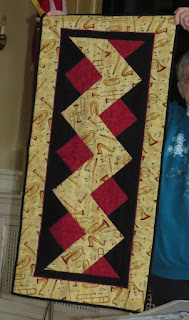 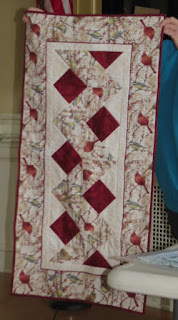 Cheryl Doody made a pair of table runners to give as gifts. 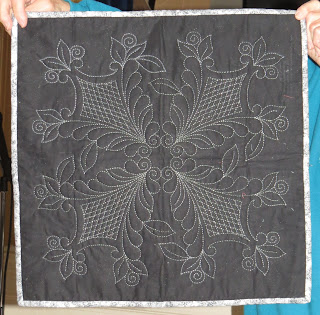 Cheryl used a design pre-printed on fabric and metallic thread to finish this piece she donated to the silent auction. 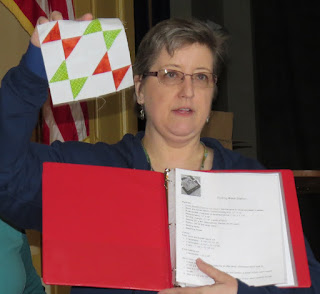 Lori Anderson is following the "Splendid Sampler"- a project by Pat Sloan and Jane Davidson.  They suggest keeping everything in a binder, which Lori has started. 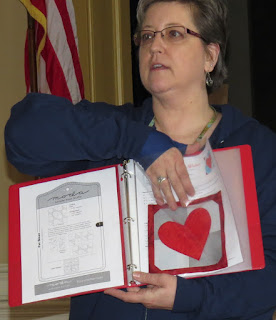 As there are 2 blocks per week, Lori knows her binder is too small.  Maybe she'll just stop when it's full. 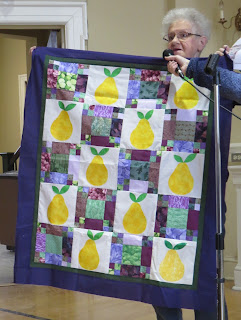 Mary Anne Watson assembled this top using the pear blocks she and Melanie had used as a block of the month when they were heading up community service.  One pear seems to have vanished.  Now that she made a new one, it's sure to turn up! 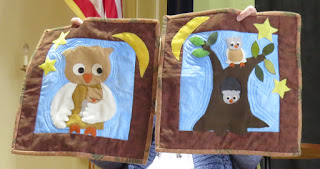 Mary Anne finished these little wool applique owls as a birthday gift for her sister. 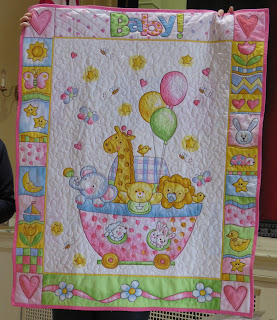 Melanie needed a baby quilt for a friend, so found this charming little panel. 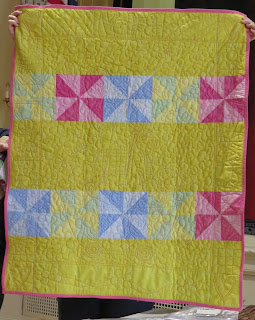 Since it's "just a panel", she did fussier quilting, which shows better on the back. 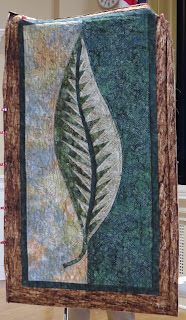 Terry McGuire had always wanted to try paper piecing, so she took the Judy Neimeyer class with Barb Miller last year.  Terry has decided she will probably not do any other paper piecing projects in the future. 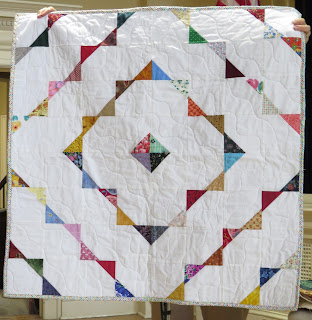 Terry did the quilting and binding on this "Goose in the Corner" quilt for community service. 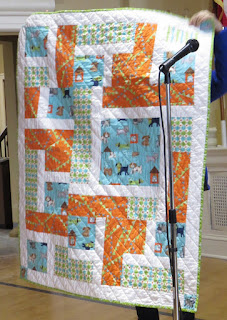 Lori Sass made this for a baby who recently joined her family. 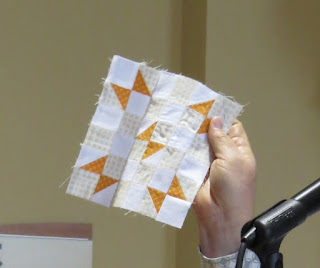 Connie Grimsley is also doing the "Splendid Sampler", and thinks making half square triangles that finish at one inch is a great way to weed out the people who aren't serious about this project. 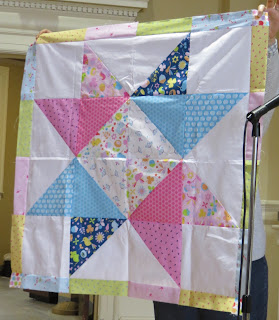 Connie is also making a quilt as a baby gift.  This one was much easier to piece. 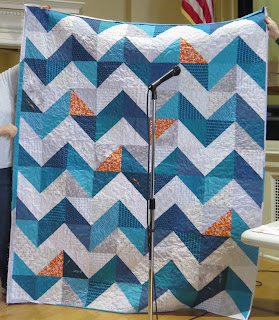 Connie just finished this as a wedding gift. 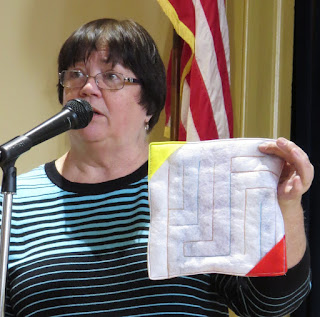 Ann Renica introduced us all to the concept of a fabric maze, which she made for her grandson.

Apologies to Naomi Lapp of "The Quilt Room" in Penn Yan.  I had to leave early, and wasn't able to enjoy her presentation, or get pictures to share.

In March, we will have our annual community service work day.  If you haven't already signed up to help out, contact Connie or Vinnie to find out what is needed- or let them know what you'd like to work on!


Posted by Martha Lorshbaugh at 11:28 AM No comments:

On Saturday, January 29, a group of members assembled to hang the wonderful display of quilts entered into the "Architecture" challenge.  It wasn't easy making them all fit neatly and still have room for each one to be appreciated! 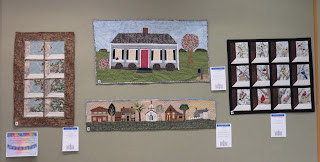 If you can get over to the library to see them in person, you will be able to fully appreciate the talent and workmanship in each one.  But if you can't, I hope the pictures will do them justice.  If any  seem slightly askew, it is photographer error, not the quilts.  .


Quilts will be on display throughout the month of February.  The library is open Monday – Thursday    9 AM – 9 PM, and Friday & Saturday     9 AM – 5 PM.  They will be closed Feb. 15 for Presidents Day.  If you go, don't forget to fill out a ballot- one for Members only and the viewer's choice award
Posted by Martha Lorshbaugh at 9:03 AM No comments: 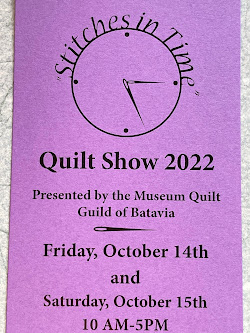